Philadelphia Inquirer // We Others by Steven Millhauser 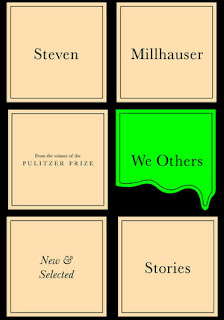 I had a great deal of fun reading and rereading the stories in Steven Millhauser’s We Others: New and Collected Stories. I brought the galleys with me to Seattle last month and it was the perfect thing for a pair of cross-country flights. It’s a spectacular book.

My review is in today’s Philly Inquirer. It’s always cool to write for the newspaper I grew up reading, and to which I still subscribe:

I’m usually not a big fan of greatest-hits collections like this one. A typical book of short stories, artfully arranged, has its own inner logic and narrative arc in the same way a great record does. Taken alone, a song such as Springsteen’s “Blinded By the Light,” for example, always rocks, but the way it effectively sets the mood and raises the bar for everything still to come on Greetings From Asbury Park cannot be overstated. And that song is made even better by what follows it. Context is everything.

Fortunately, We Others isn’t only a greatest-hits introduction to Steven Millhauser’s world – it’s a cordial invitation to it. And his is a world that looks an awful lot like our own, except distorted ever so slightly, enough to make it comfortable and disconcerting at the same time. Over the last three decades, Millhauser has proven himself to be one of our most consistently dazzling American voices. He won a Pulitzer Prize for Martin Dressler – one of the truly great novels of our time – and has become the kind of big-time author who will have prizes named after him one day. (Not anytime soon, I hope, as those tend to be posthumous.)

Of the 21 stories here, seven are new and 14 have been cherry-picked from four previous collections, “as if,” an Author’s Note points out, “they’d been written by someone whose work I had never seen before.” The patchwork approach here gives us the opportunity to focus on the mechanics and beauty of each individual story. Not every one will hit home with every reader – the diversity of styles precludes that possibility – but we’ll always find something profound and worthwhile.

Take “The Slap,” among the newer stories here. The premise is simple, and weird: A sleepy New York town is thrown into distress by the presence of a stranger who every so often shows up to slap a resident in the face. The good citizens’ fear and outrage grow to near-manic proportions over the perhaps harmless violations. “Far from spreading random terror, the Slapper was making a point: his target was not particular people, but the town itself.” The growing tension soon reaches the telltale heart of the suburban dream.

“Getting Closer” concerns a 9-year-old boy named Jimmy picnicking with his family and eagerly looking forward to jumping in a river. He doesn’t dive right away – he’s not scared, but rather wants to savor the anticipation. Millhauser here toys with the way time functions in fiction. “Everything has led up to this moment. No, wrong, he isn’t there yet. The moment’s just ahead of him. This is the time before the waiting stops and he crosses into what he’s been waiting for.” It’s a strangely captivating story that uses Zeno’s paradox as a way of spelunking the adolescent imagination.

“The Invasion from Outer Space” is another gem. In it, Millhauser retells the traditional alien-invasion sci-fi story, but does so in a way so realistic that it doesn’t feel like mere camp or fantasy. It demonstrates what makes this author so fascinating: Millhauser can pinpoint the deeper truths about how spectacular and even life-changing events can appear ordinary on the surface. Along the same lines, though, he also locates moments of transcendence in the most mundane details of our everyday lives.

The title piece, “We Others,” is the only of the new stories that left me wanting less rather than more. (Even if the magnificent chestnuts “Eisenheim the Illusionist” and “August Eschenburg” were 1,000 pages long, they would still be too short for my taste.) It’s an expansive take on the ghost story that I was personally unable to warm up to. I imagine, however, that many readers will love it.

Of the previously published stories, “The Eighth Voyage of Sinbad” and “A Visit” are particular favorites. “A Protest Against the Sun” calls to mind both Thomas Mann and Yukio Mishima, yet feels entirely fresh and original.

Perhaps this comparison is unfair to both authors, but Millhauser at times (“The Next Thing” and “People of the Book”) also reads a bit like the Argentine master Jorge Luis Borges in his ability to take an outlandish or even metaphysical concept and bring it to full artistic fruition on the page. Millhauser also avoids the cliches and formulas endemic to so many of our contemporary factory-farmed MFA short stories. If Millhauser had as many disciples as, say, Denis Johnson or Alice Munro (both wonderful authors, I should add), our literary landscape would be a lot more wondrous and capable of surprise.

One possible critique of We Others is that these stories appeal more often to the intellect than to the heart – that they’re researched, but not felt – but those strike me as tired and even sad distinctions. What I love about Millhauser’s fiction in general and the stories in We Others, new and old, is that they’re delightfully weird and sometimes even challenging in the best possible ways. They contain big words and big ideas. They will force you to think about the world around you a bit differently. But, mama, that’s where the fun is.