Today is the official pub date of The Pale King, which I’m 100 pp. into. The DFW Industry makes me a little uneasy, but I’m struggling to put my finger on why exactly that is. His self-appointed BFF Jonathan Franzen has a spectacular essay in the current New Yorkerabout dealing with his grief. Wallace’s lasting legacy might end up being the way he was willing to writing about a wider and truer range of his own inner-monologue; he expanded the emotional landscape available to to writers, and Franzen makes wonderful and heartbreaking use of it here.

Sheila Heti’s How Should a Person Be? does something similar in that it draws from a different part of the inner life than most literature. It accomplishes a kind of self-examination that most people never get close to doing. It’s my favorite book of the year so far and worthy of far more attention than it’s getting. Sheila was nice enough to mail me a copy, as it’s not for sale yet in the U.S.
My reading list is swelling in anticipation of more leisure time this summer. I can’t wait to get to The Color of Night by my former teacher Madison Smartt Bell. His recent interview about his inspiration was just spectacular. I studied with Madison as an undergrad many years ago, and even now I find myself relying on things I learned from him, both in my own writing and when teaching. I identified with this strange interview perhaps a little bit too much.
I’d like to thank Tim Horvath for this thoughtful refutation of the lone negative review of Extraordinary Renditions, which appeared on the blog of The Writer’s Center. I’ve admired Horvath’s fiction and an enormously grateful for his efforts. He wasn’t the first author to come to defense of the book. Last month, Anis Shivani had this to say on the Huffington Post:

As though to thumb their noses at the rest of the reviewing community at the end of a year of calculated affront, the Times picked Andrew Ervin’s Extraordinary Renditions, from Coffee House Press, for a good old thrashing. Ervin’s crime was that he tried to bring a risky politics to his three intersecting novellas–not the kind of thing the Times goes for.

Kyle Semmel also interviewed me for that same blog. The topics we covered included the Hungarian (non-)response to the book, my current research into Philadelphia’s (and my own) Lenape heritage, my fear of A.M. Homes, and my harassment of Julian Barnes:

Shortly before I moved abroad, while I was still an undergrad, I sent a series of letters to the English author Julian Barnes. I asked for advice, tried to pawn off my own horrible early stories on him, and so on. His replies were always thoughtful and unfailingly polite, even in the face of my sophomoric and ham-handed invasions of his privacy. One of the things he told me has been vitally important to my development (such as it is) of my writing: Barnes told me to write for myself and for that part of myself I see in the people closest to me. That is still how I think of my audience…

Finally, here’s the gartner snake I found on a Philadelphia sidewalk. It was injured and I picked it up and moved it to my front yard, where it buried its head. I’d worried that it died, either from its injury or maybe the recent cold spell. 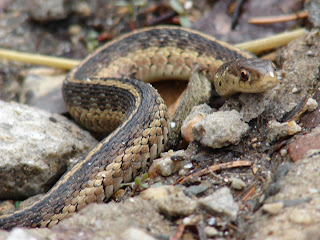