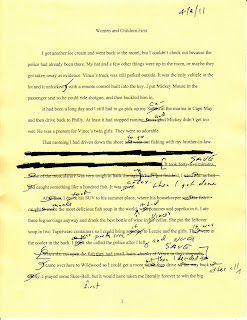 While I figure out how I’m going to merge this blog with my site er3n.com, I’ll post a little bit about what I’m working on.

I have a story collection nearly finished. The collection is anchored by a 5-story cycle called “Down the Shore” and loosely inspired, at least formally, by Tibor Dery’s “Games of the Underworld.” Stories in “Down the Shore” have appeared in Golden Handcuffs Review and Monkeybicycle and one is forthcoming in Conjunctions.
Yesterday I finished the first draft of the fourth story in the cycle (which will probably end up coming third when they’re put together), and here’s what my first drafts typically look like. I hope to get this into shape over the next few weeks, and then write the oh so grand finale.
In other news, books I’m reading now or want to read very soon include: The Pale King, Emily Alone, Nowhere Near Normal, Luminarium, There is No Year, and Silver Sparrow. And this summer I’m looking forward to finally getting to Freedom and beginning my research about the original Lenape settlement at what became Philadelphia.